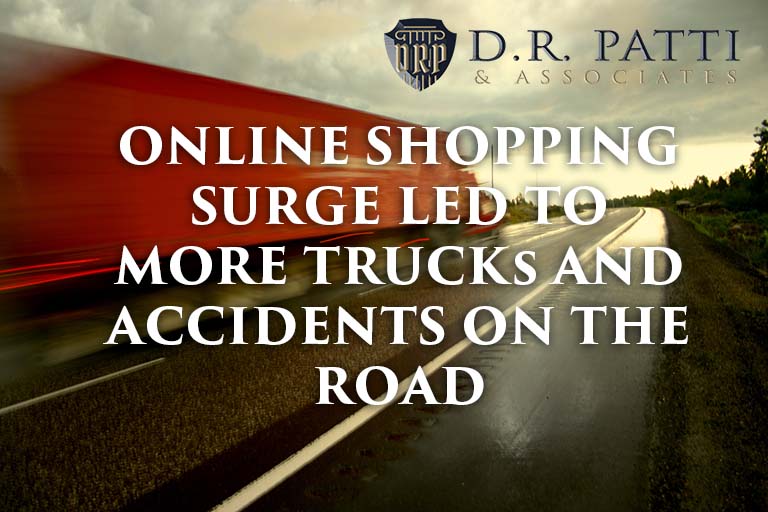 When the COVID Pandemic forced many to quarantine from home, home delivery services, in particular Amazon, saw their business boom. That boom, however, resulted in more large commercial trucks on the road and more truck accidents. According to a report by the Advocates for Highway and Auto Safety, deaths from truck accidents increased by 48% from 2009 to 2019.

As of 2019, there a reported 2 million heavy and tractor-trailer truck drivers. This includes 300,000 to 500,000 long-haul truckers. The U.S. Bureau of Labor Statistics expects the number of trucking jobs to increase by 2%.

The effect of Amazon’s growing business on the number of trucks on the road cannot be underestimated. While there are no specific hard numbers on how much of the truck increase is due to Amazon, there are stories that Amazon has caused increased demand for trucks and truck capacity. Common sense dictates that as Amazon sales increase, the more trucks will be servicing Amazon’s needs.

To satisfy the demand, Amazon has relied on its own fleet, as well as contracting with freelance or independent truck drivers and other commercial transporters. According to reports, Amazon has emerged as the fourth largest delivery company in the nation, it has also relied on a network of small trucking companies and owner-operators. In either case, Amazon controls the drivers’ schedule. The New York Times reported that “Amazon requires that 999 out of 1,000 deliveries arrive on time, according to work orders obtained from contractors with drivers in eight states.”

Their paychecks are signed by hundreds of companies, but often Amazon directs, through an app, the order of the deliveries and the route to each destination. Amazon software tracks drivers’ progress, and a dispatcher in an Amazon warehouse can call them if they fall behind schedule. Amazon requires that 999 out of 1,000 deliveries arrive on time, according to work orders obtained from contractors with drivers in eight states.

But it’s not just more trucks. Amazon boosted its sales with promises of 2-day free shipping. This promise increased pressure on truck drivers for quicker deliveries. BuzzFeed News reports that Amazon dispatchers “often compel [drivers] to skip meals, bathroom breaks, and any other form of rest, discouraging them from going home until the very last box is delivered.”

We’ve heard the stories of Amazon delivery drivers urinating or defecating in their trucks because they don’t have the time to go to a restroom. They have deliveries to make, and everyone wants their Amazon Prime 2-Day deliveries. With a shortage of truck drivers, delivery companies have to make keep up with demand with less drivers.

The driver shortage has been a persistent issue in our industry for many years,” says Bob Costello, chief economist of the ATA. “We have numerous examples of fleets of all sizes raising pay, increasing bonuses and increasing benefits, like time at home, in response to the shortage.” Costello says the “shortage” has been exacerbated by the coronavirus pandemic and new regulations that require better drug testing of drivers (which the ATA supports). And, he says, this issue will get worse in coming years as truck drivers begin to retire. The average age of American truck drivers is 48.

High turnover or retention rates at long haul trucking companies, as high as 90%, may contribute to the shortage. This means that 9 out of 10 long haul truck drivers don’t return.

The Covid pandemic contributed to the shortage as well, with the trucking industry reportedly losing 6% of its workforce.

Recently, a Florida jury found two trucking companies responsible for the death of a teenager in a truck accident and hit them with a $1.2 billion verdict. Of that amount, $900 million was for punitive damages against the Canadian trucking company whose truck plowed into 20 vehicles, including that of the teenager. Those vehicles had been stalled in traffic because of the crash caused by the other trucking company.

Evidence at the trial showed that the driver for the Canadian company was traveling at 70 mph on cruise control and did not attempt to brake until one second before the truck crash. As to the first driver that caused the initial truck accident, the attorney for the teenager’s family argued that the driver was distracted by his cell phone, driving over the legal limits of hours and did not even have a commercial driver’s license. That driver hit a car, causing it to flip and burst into flames.

Like the rest of the nation, truck accidents in Nevada are increasing. Recently, two semi-trucks crashed into each other on U.S. Highway 95 in east Las Vegas, causing fuel to spill onto the freeway. In June, an Arizona commercial truck driver was sentenced to a minimum of 16 years in state prison for plowing into and killing five bicyclists, as well as injuring others. Found to be under the influence of methamphetamine at the time of the crash, the truck driver told investigators he fell asleep while driving his regular work route.  On July 13, 2021, a semi-truck driver was killed when the front tire of his truck blew out on I-80.
If you or a loved one have been injured or killed in a crash involving a commercial truck, the accident attorneys at D.R. Patti & Associates can help. Our team of truck accident lawyers have successfully litigated and obtained millions of dollars for families affected by truck accidents. When involved in a crash with a commercial truck, it is very important to retain a personal injury attorney right away. An injury lawyer experienced in dealing with trucking companies will ensure that evidence, such as the “black box” and even the truck, are preserved. Our accident attorneys will then retain experts to review the evidence and conduct any further investigation to prove our clients’ case.